I received this postcard via postcrossing of the Sky Tower in Auckland, New Zealand. While looking for information on the Sky Tower, I came across this info:

The upper portion of the tower contains two restaurants and a cafe, including a revolving restaurant which is located 190m from the ground, turning 360 degrees once every hour. There is also a brasserie style buffet located one floor above the main observatory level. It has three observation decks at different heights, each providing 360 degree views of the city. The main observation level at 186m has 38mm thick glass sections of flooring giving a view straight to the ground.The top observation deck labeled 'Skydeck' sits just below the main antenna at 220m and gives views of up to 82 km in the distance.

Another really cool feature about the Sky Tower is the different illuminations it has to promote different causes. 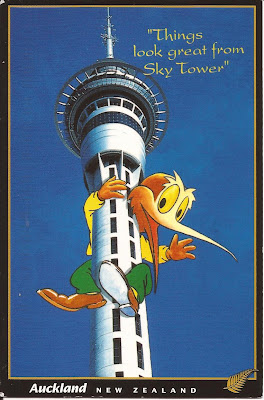 I love the stamps that were posted on this card. The All Blacks is the name of New Zealand's Rugby team. New Zealand is currently hosting the Rugby World Cup, and Maureen mentions that everyone is having a blast. I bet!